Signed to independent hip-hop, soul and electronic label Tru Thoughts (Bonobo, Quantic), London-based singer-songwriter Rhi has been dubbed ‘one to watch’ by the likes of Lauren Laverne and Toddla T.

Ahead of her Record Store Day release (a limited run of her debut album ‘Reverie’ on transparent purple vinyl – dreamy), we caught up with Rhi to learn what influences her songwriting, and find out which records appear on her RSD wish list:

What was the first record you ever bought?

Hmm, possibly a Doors album. But my earliest memory with records was a collection I inherited from my dad – Led Zeppelin’s ‘Houses of the Holy’ and Jeff Beck’s ‘Blow by Blow’ were a couple of my favourites from that.

Tell us about your Record Store Day release…

My debut album ‘Reverie’ is going to be released on limited edition, transparent purple vinyl, with a bonus remix by Jam City included on it. Tru Thoughts wanted to release an up-and-coming artist’s album this year in support of new music and lesser known musicians. So it’s pretty special to not only have my first album pressed to vinyl, but to also be backed by a respected label with a strong ethos like that.

What influences your songwriting?

Reality, fantasy, and everything in between.

You grew up in Ontario – what’s the music scene like there?

Yeah. I grew up in rural Ontario so I wouldn’t say there was much of a scene, at least not like there would be in a city. Locally, country music was always pretty popular but I was a bit disconnected from that. Unfortunately I haven’t spent a lot of time in Toronto, but I know there’s a lot of cool, varied stuff going on there.

Which women in music inspire you most?

When I first started writing songs, probably 15 years ago or so, Ani Difranco was a big influence on me. She released tons of albums on a label she started herself, and crafted her own unique sound (vocally and musically) . She worked hard and maintained a strong sense of self without bowing to social norms or expectations.

Name one of your favourite vinyl finds…

I was really into vinyl as a teenager, cause I loved classic rock. I remember being particularly pleased when I discovered a Heart record (Greatest Hits/Live) in a shop in Toronto. I’d never heard of them before, but was so impressed that it was fronted by sisters – one was the singer, the other was lead guitarist. At the time, I was learning guitar and didn’t know of many (if any) female guitarists, so it was an influential find.

Catch one of Rhi’s live sets on Record Store Day; she’ll be playing David’s Music in Letchworth at 1pm, then Resident Records in Brighton at 5.30pm. 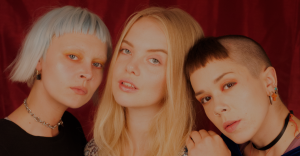