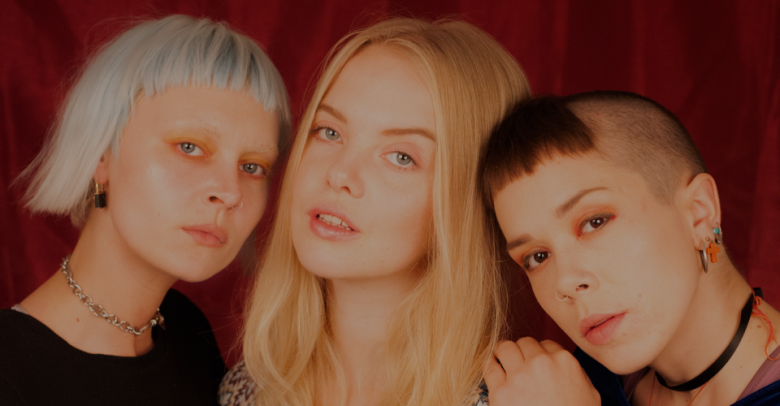 Leading a new wave of female guitar bands in the UK, fierce pop-rock trio Dream Wife are a force to be reckoned with. Back in London after playing Melbourne’s Laneway Festival, we talked about the inspiration behind their debut album, future plans, and what it means to be female in 2018…

Who are Dream Wife and how did you meet?

Dream Wife is a pop-rock band, primarily. We met as a trio and formed this project when we were studying art at Brighton University, in the UK. As three artists as well as musicians, we work closely with our collaborators in an aesthetic and conceptual sense, within this project.

Tell us about your band name – how did you come up with it?

Dream Wife is about flipping the script on the gender expectations of women. It’s about being a bad bitch, being unapologetic, being angry, being sexy, being all these things a woman is, and owning it, feeling liberated for that.

Describe your sound in three words:

Congrats on the release of your debut album! What was the biggest inspiration behind it?

As three friends on this Dream Wife journey together, it’s been really inspiring growing together with this project as a unit and also individuals, and supporting one another through. We are really lucky to have been able to work with vibrant and constantly inspiring friends/collaborators throughout this project and play with some of our favourite bands like The Kills and Sleigh Bells, it’s all inspirational stuff.

Making it into the top 40 would make one hell of a statement. For guitar music, especially women in guitar music & for an independent artist.We got a shot. It’s exciting.If you’re thinking about buying the album…this is the week! Charts announced on Friday! Much luv, Ya wives (Links in bio) 🖤🖤 Stream/download: http://hyperurl.co/DWDreamWife Buy: https://dreamwife.tmstor.es

What could be done to get more women into record stores and buying vinyl?

To have more vinyl that might speak to and for women, to have a more diverse range of voices in music being supported to the stage of getting a record pressed. It’s not like it’s some thing that women just aren’t into, but it’s another thing in music that sometimes becomes like a boys club, geeking out over records, girls can definitely do that too, we need more female identifying voices on record.

Which female musicians are you loving right now?

We just played Laneway festival in Australia, and caught Aldous Harding’s set which really moved us. She is an incredible being, words don’t really cut it to describe the feeling in her music and performance, she is just straight up mesmerising.

What’s next for Dream Wife?

We are gonna take this debut out on the road, we will be playing our rock show around the UK and Europe in March. We are also really excited to be supporting our friends Sunflower Bean on a tour around the US in May.